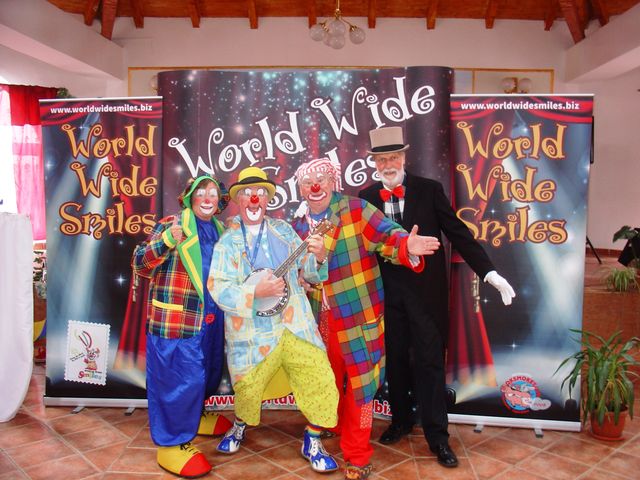 For the last 20 years I have been part of a small team of Clowns, they are Conk the Clown (that it me), Clown Bluey and from Holland Clown Masjolie and her husband Ben our Ringmaster. We are known as “The World Wide Smiles” taking smiles to places in the world that have not seen clowns in the flesh before, countries from India to Romania and places in between. Over the years there have been lots of stores I could write about, but here I will share with you just a couple. Please note all the trips we undertake are done on a voluntary basis. This story is from one the six trips that we have been on to Romania, and it took place in an orphanage, and the only place to do the show was in a church next door to the orphanage. The church was a very old with very poor lighting consisting of 15-watt light bulbs, the only place with good enough light was around the alter, so in order that we could setup for the show we decided to move the alter. After the setup we went into the church vestry to get changed ready for the show. We sat down in the church vestry waiting for the children to arrive so that we could start the show. We must have sat there for over half an hour with no noises coming from the church what so ever, so we asked our translator to find what was happening, in a few minutes he came running back to tell us that the children and priest were sitting in the church waiting for us, because they had always been told not to make any noise in church. However when we went in and started the show with lots of noise they soon joined in along with the priest and they raised the roof. That was a great day and we also made a lot of people very happy.

This is my last story for now, it took place in 2005, when we had a e-mail from the Sri Lankan Education Department inviting us to help get the children back to school, it had been 10 months since the Tsunami and lots of children were still traumatised by the events which had happened.

The trip was mainly to perform shows in the southern part of Sri Lanka, on this particular we day were to perform school shows in the middle of Sri Lanka, however two days prior to us going into the schools, there had been a grenade attach in the area by the Tamil Tigers, but as they say in showbiz the show as to go on. We were given protection from armed guards, to be exact the Sri Lanka Army Special Forces Regiment which complied of eight soldiers carrying submachine guns in two Land Rovers. While we performed they were on look out for any more potential attacks from the Tamil Tigers, I’m glad to say the shows went off without a hitch, but we did think at the time maybe there is more than just the kids watching the show. After the last show the Colonel Chief invited us back to his barracks for some lunch as a thank you. As you may or may not know the Sri Lankan people use their fingers to eat meals, so as not to spoil our makeup we asked them for some cutlery so we could eat the food. Well they had to go and search the barracks for some, but in the end, they came up trumps with some cutlery for us. I could go on, but I’ll save some for another day.

I do hope you have enjoyed reading some of the stories from our travels, but without people like you and the people in the countries we visit who plan the itinerary for us, we would not be able to make these children laugh and put smiles on their faces.

Please take a look at our website to see some more photos from the adventures that we have been on so far, thank you for your support.